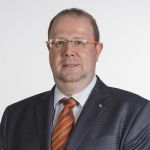 Patrick Want is the CFO at Verdoso Investments S.A., a financial organization that makes direct investments in various mid-market industrial companies. He has held this position since October 2011. As the CFO, some of his responsibilities include the general administration of the company, financial and accountancy processing, tax administration, managing value-added taxes, and meeting with auditors and bank executives. He has also the responsibilities of auditing the US investments.

Patrick earned a diploma in accounting and taxation from Haute École de Namur-Liège-Luxembourg Hénallux in 1991. He has more than 25 years of experience in the accountancy, finance, and administrations, acquired in various types of companies. He fluently speaks French and English. One of Patrick’s future goals is to move to the United States.

His previous roles include Accounting Manager for VM Sàrl (funds management), and Supervisor Admin Luxembourg for Ricoh Luxembourg. His main achievement for Ricoh was the transfer of the accountancy department from Brussels to Luxembourg and structure matching with the financial regulator’s ules. He was also a Financial Controller for InCypher S.A. (telecommunication) for 5 years.

In his spare time, he enjoys traveling, reading, and watching movies. He resides in Lisle-en-Barrois, France.

International Society of Business Leaders Member, Patrick Want, can be found in the Society Directory, where he is looking forward to networking with you.