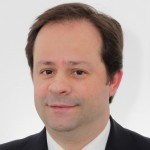 Paulo Jorge Martins is the Director of Corfield comércio de artigos de desporto, Lda. He works very closely with the team to establish its concept, monitor inventory and overseeing logistics and negotiating with suppliers. Paulo is considered an expert in logistics, management, stocks, negotiating and speaks five different languages: English, French, Italian, Portuguese and Spanish. Some of his other responsibilities include overseeing a team and several stores, stick levels, and determining which products they should carry. He is also is in charge of pricing, sales and promotions, working closely with the financial department and assisting with the launch of a new company website.

Paulo completed his MBA at the Institute of Business Management, and his Bachelor of Arts in Chemistry at the University of Lisbon Faculty of Sciences. Within the next three to five years he’s looking to experience working with a multinational company. He credits his ability to encourage people to work as a team to being his keys to success. Paulo is looking forward to networking and connecting with other like-minded professionals, and to gaining the recognition and credibility of being a member of the International Society of Business Leaders.

In his spare time, he enjoys sports, football, basketball, swinging, running, music, reading, writing, and travel. He resides in Portugal.

The International Society of Business Leaders Member, Paulo Jorge Martins, MBA, can be found on the Society Directory, where he is looking forward to networking with you.