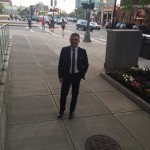 Peppino Sampietro is a highly successful business development manager with 30 years of experience in high-level sales. Since 2013, he has served as South West Europe Regional Manager for A.W. Chesterton Co. and has been a Senior Manager for their retail and wholesale market since 2009. In the last 5 years he has fourfold the sales results of South West Europe countries for my company, and rebuilt the direct sales force and completely renewed the wholesale channels.

He is the business development manager of the entire region, responsible for retail operations, increasing sales, directing the sales force organization, overseeing meetings, and conducting training. His area of expertise is sales, coaching, new business development and promoting a high level of group relationships.

Peppino graduated with an International Bachelor’s in Industrial Science and Economics from Freie und Private Universitat Universitat Herisau AR (The Independent Private University of Herisau, Switzerland) in 1994. He is part of Communications & Power Industries (CPI) for the oil and gas industry. Peppino started his career in the U.S. building his international experience, and always had a keen interest in industrial engineering, oil and gas, business development, and negotiation. He speaks fluent English, Italian and Spanish, and a working proficiency of French.

Going forward, Peppino wants to further hone his management skills and contributions, sales communications and marketing, as well as find opportunities to increase his responsibilities in a general management role. The key to his success has been dedication, capacity for planning, and recognizing the importance of process improvement. When he’s not working, Peppino enjoys sports, running, going to the gym, music and theatre. He loves reading and studying and considers himself a wine expert. Peppino is married to his wife and they have an 8 year-old son together.

International Society of Business Leaders Member Peppino Sampietro can be found in the Society Directory, where he is looking forward to networking with you.