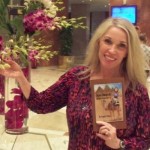 Randi D. Ward is a celebrated author, editor and educator who has dedicated her life and career to realizing her dreams and empowering others to follow theirs. Currently, she serves as the Chief Editor and a Contributing Writer of MoroccoPens, a free independent magazine that publishes objective and impartial Moroccan and international news in the English language. She is also the President/CEO of Randi D. Ward (Author).

Having released her novel Because I Believed in Me (My Egyptian Fantasy Came True) in 2012, Randi has inspired her audience and gives readers a message of positivity and call-to-action. Recognized in her industry and beyond for her contributions, she has been honored with 10 national radio interviews and numerous newspaper and magazine articles in the USA and Egypt.

With nearly 4 decades of experience teaching grades 7 through 12, Randi has taught in both rural and inner city districts and pioneered the Gifted Program in West Virginia. A versatile and dynamic educator, she taught grammar, literature, creative writing, essay writing, research writing, journalism, public speaking, and drama. Randi also spent time in Egypt teaching English as a second language (ESOL) to Egyptian university students and university graduates and professionals seeking to become fluent in the language.

In 2015, Randi was honored as our Humanitarian of the Year and as a Top Female Executive. Her other awards and credentials include the National Association of Professional Women (NAPW) where she was named 2014-15 VIP Woman of the Year, an elite member and 2015 Delegate of the International Women’s Leadership Association (IWLA), a 2014 Pinnacle Professional Member of Continental Who’s Who, an elite member of Strathmore Worldwide Who’s Who where she will be featured on a full page profile in its next book, and 2015 Professional of the Year with International Association of Who’s Who. She was also named “Entrepreneur of the Year 2014 in the Education Industry” by Worldwide Who’s Who and was the month of March featured profile in the 2015 Worldwide Branding calendar.

Randi credits a lifelong commitment to pursuing excellence and to keeping an open mind to continually progress as a learner. She graduated at the top of her high school class and with honors both at her undergraduate and graduate levels at Marshall University, where she enjoyed time as a Writing Fellow.

Randi resides in Lawrenceville, Georgia. Outside of her busy writing schedule, she enjoys spending time with her husband and Saint Bernard dog and participates in social media and physical fitness activities as well as being an avid gardener, a world traveler, a YouTube video creator, and a photographer.

International Society of Business Leaders Member Randi D. Ward can be found in the Society Directory, where she is looking forward to networking with you.