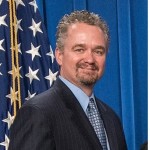 Thomas Feeley has over 20 years of executive federal management experience creating and directing a wide range of programs that have provided him with expert knowledge of and the ability to manage a complex, large-scale criminal alien identification, detention, and removal program and operation. He currently serves as Deputy Assistant Director of the US Immigration and Customs Enforcement (ICE).

Throughout his lengthy career in law enforcement, Thomas has honed his leadership abilities by focusing on measurable performance, communication, and vigilant attention to ICE’s mission while exercising deliberate stewardship of the Agency’s financial resources. ICE is the principal investigative arm of the US Department of Homeland Security and the second largest investigative agency in the federal government. A merger of the US Customs Service and the Immigration and Naturalization Service, ICE now has more than 20,000 employees with offices in all 50 states and 47 foreign countries.

A former US Marine, Thomas holds a BS in Criminal Justice from Kaplan University Davenport (2005) and an AA in Criminal Justice from Genesee Community College (1996). He speaks English as well as some Spanish and Arabic and speaks frequently at the National Sheriffs Association. Going forward, he has a goal to step into a senior executive service (SES) level position within the Washington, DC area. In his spare time, Thomas enjoys fishing and football.

International Society of Business Leaders, Member, Thomas Feeley, can be found in the Society Directory, where he is looking forward to networking with you.